When I heard of this game I was a bit skeptic. The reason for that is that I played a lot of them, and none of them got my attention. So, I got on the Grand Epic web site, and tried it. First thing you notice is character creation. You see all those nice graphics and you can’t believe that you will be playing that character (It looks too good to be true).

So, what do we have? There are 4 classes, and you can choose to be male or female (logic). The classes are typical for most RPG based games. It is only they are called different name. So, you have Flower valley which use bow for ranged weapons and can heal. Next one is Shu Mountain which use sword for attacking, and they are something like classic fighters with a possibility to drain mana. Then we have Tianmu Cave, mighty fighters with unmatched fighting skills. They use broadsword and can go to berserk. Last but not least is Herming Mountain, which is typical mages. They use a rod and are very powerful using magic to kill their opponents. When you make a character you go inside one of the 3 servers. There is not much difference, so you can choose any. 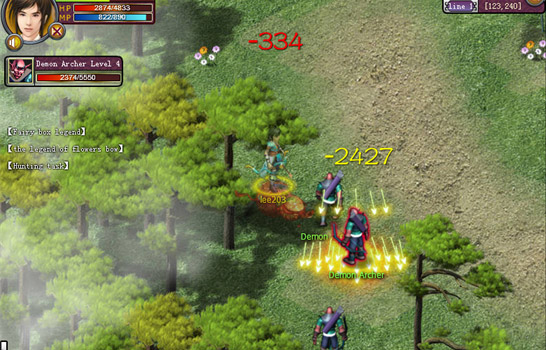 Once I logged in, I noticed a beautiful looking graphics. It is no match to any client based MMORPG, but it is alluring, and it looks pretty. I am thinking that it would be really hard to optimize the game for browsers if it had amazing graphics. In general it is a standard 2D game with anime elements. Some people could expect more, but I’m really satisfied with it. One thing I would like to add that the game should have been optimized better. Because of that graphics load slow, and you can get blur effects in front of you.

Ok, this is the part when you start to ask yourself if you want to play this game, since our ear is a powerful organ, even if we use our eyes to percept mostly everything. But, it is our ear that pulls us to the imaginary, it fuels our imagination. Grand Epic online lacks that because it is limited with few sound effects and poor music. It may not sound that much, but if you play it for few hours it can get really annoying.

There is not much I can say about gameplay. It is standard RPG based gameplay. You can move your character with W, A, S, D buttons or you can use your mouse for that. Fighting is click based and you can use your special skills with numbers.

Good thing about Grand Epic Online is that they added mounts and pets. It is getting more and more common to have mounts and/or pets in online gaming. Here we have a strange system for mounts. You need to get some rare materials in order to make a decent looking mount but, that is not all, the success rate is horrible. There are some mounts that have success rate really low and, almost impossible (1% for example).

In general, this is a fun game, but it needs a lot of improvement to be the game you want to play a lot of time. So, if you have high expectations, or you want to play this game instead of some other, client based MMORPG, I suggest you don’t do it but, if you want to have some fun, than be my guest.