LG’s 50PZ850T is one of the first of LG’s 3D TVs to incorporate two latest developments, active 3D and PenTouch.

So before delving deeper in the rest of this model’s features, we’d better start with an explanation of what these two new offerings from LG are.

LG only uses active 3D on it’s plasma models for a simple reason. LG’s plasmas aren’t able to produce sufficient brightness to balance the effects of their passive 3D filters.

As it sounds, you get a pen and you touch it on the screen. Why would you want to do that then? Well as this model can access the internet, you can use it as a mouse directly on the screen. If you are in the habit of viewing your photos on your TV, you can sweep through them with a swish of the pen. How practical is it? Well, sitting directly in front of a 50 inch plasma screen isn’t exactly how I want to access the internet. Just as well then that this model has ‘Protective Skin Glass’, which as well as boosting picture clarity also protects the screen. 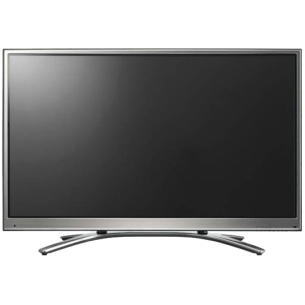 Back to the TV!

Why should you care? Well these endorsements are only handed out to a very television models that you are able to tweak the colour management controls. That means you can set up your TV to perfectly meet your own colour tastes.

The 50PZ850T marks a design change for LG, with a much slimmer screen frame along with a new reflective metal finish.

The design of the 50PZ850T has to class as a significant feature, meanwhile. For as well as boasting one of LG’s impressively slender ‘Razor Frame’ bezels, it enjoys a shiny metallic finish that’s quite new for LG and gives the set a pleasingly distinctive and gently opulent appearance.  On the screen, picture quality is about standard, nothing to shout home about. Blacks are deep and comparable to the better LCD screens, and contrast performance is very good, with clear details in both shadow and bright areas.

The colour performance is going to be one of personal taste. As you can calibrate the colour management yourself, you can set this model up to suit your taste. If you prefer really bright vivid colour, this may not be the set for you though.  Saying that, the colour balance out of the box is subtle and realistic, and most people will be delighted with those settings.

As you’d expect with a plasma, there is virtually no motion blur or judder when watching high speed action.  When it comes to watching 3D, the experience is very similar, and this model has made an improvement over previous 3D models with “ghosting”.

Sound quality is good, partly due to the fact that as this is a 50 incher, it’s heavier and less prone to rattling that smaller/thinner models suffer from. Saying that, the bass line is a bit lacking.  Overall the LG 50PZ850T is a great looking modern slick designed 3D TV. You will want to adjust the colour settings to suit your needs, which is easily done with this model. The picture quality is good with good performing HD, and the 3D is generally clean and crisp. Easy to use, this LG would make a large screen choice, though you may want to think about getting separate speakers to boost the sound.