It should be no surprise then that now when they finally launched a 3D TV it was something a bit special: a Cinemascope 3D TV with a 21:9 aspect ratio, the same as you get in a cinema, meaning you no longer have to compromise between black-bars or cropping;regular 16:9 widescreen 3D TVs were launched at about the same time though.

One place where Philips do aim to lead the way is with auto 3D that won’t require glasses. Although they may not be first to market their system, they may be the best of the first generation. Other positive features include how far you can sit from a screen and how an acute an angle you can be at for 3D to still work.

As you would expect from Philips all of their 3D TVs benefit from exceptional sound quality and the 2D picture quality is similarly top quality. 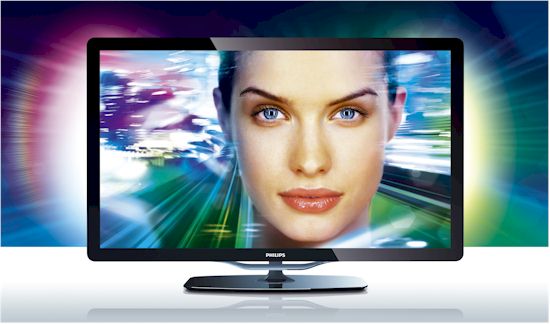 Like all but LG, Philips’ first 3D TVs feature active shutter systems to trick the mind into thinking it is watching a continuous image when in-fact the picture is flickering so each eye is in turn seeing different images.

Philips LED pro system gives the LCD screens a boost and makes light and dark clearer, this has proven to be vital for good quality 3D picture quality as a lot of light is lost going through the tinted 3D glasses and screens can otherwise be difficult to see with bright ambient light. Not everyone watches movies in the dark and for 3D to be truly successful it will need to be something people use on a regular basis whatever they are watching, not just films.

Philips AmbiLight system is also included on its 3D TVs, seen as a gimmick by some it tries to give extra impact by projecting colours form the back of the TV on to your walls based on the consensus of colour on your screen.

Philips 21:9 3D TV is ideal for the current market of movie fanatics who want a real home cinema experience, the 21:9 and AmbiLight, along with the 3D of course, should immerse them right into the films they watch. Philips’ standard sized 3D TVs may be slightly more for the average consumer but unlike someone like LG, Philips seem happy to focus on the top end of the 3D TV market.

Philips’ lack of 3D upscaling is perhaps another feature of them aiming at movie buffs who may only be interested in the latest 3D films in true 3D: therefore unlike many 3D TVS Philips 3D can’t turn 2D into 3D which seriously limits the amount of content available to users of this television.