Sharp are looking to bring out the first 3D tablet device that wont require glasses using the same technology as they use in the screens that they provide for making the Nintendo 3D-DS handheld consoles. This development may stand them in good stead for Auto 3D TV development.

Sharp’s pre auto 3D TVs in their Aquos range have become known for great picture quality and a good 2D upscaler. The upscaling means that a 3D TV suddenly has access to a huge amount of 3D content by converting 2D content on the fly; this isn’t as good as content filmed in 3D but it is seen as vital to increase the uptake of 3D TV: which will otherwise be limited on the amount of content available for some time.

One thing that Sharp have been pushing in their TVs is a four colour technology that they call Quatron:this exists with 3D TVs as well though.With printing four colour CMYK is a standard now rather than three colour RGB that most TVs are based on: Sharp takes the same step with TVs to give a better depth of colour. 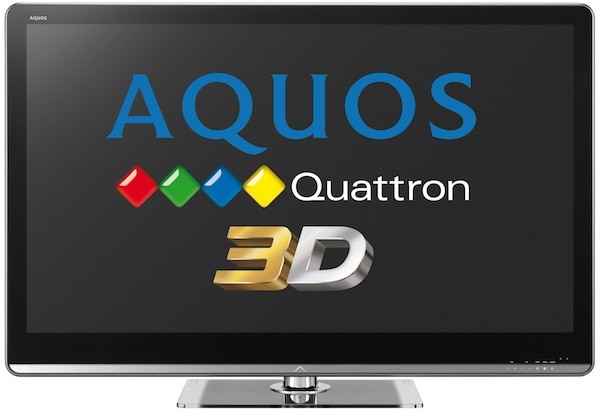 All of Sharps TVs are based on LCD and have an Aquos LED backlighting system to give a brighter picture, meaning that you can view 3D TV even in a bright Room: the design of their 3D glasses also helps keep out unwanted background light. Unfortunately some reviewers have found that the shiny texture of Sharp’s screens may cause problems with reflections that can make 3D content through tinted glasses especially difficult to view; also the reflection may be visible more to one eye than the other ruining the 3D effect.

Sharps TVs are also some of the most future-proof, as far as they can be with Auto 3D coming out in late 2011. In terms of ability to access content online and work with different formats Sharp’s 3D TVs have built in Wi-Fi and built in decoders for MPEGs and other files.

In tests Sharp also scored well compared to other manufacturers in terms of the Cross-talk, blur and flicker issues that have beset early 3D TVs. While some TVs suffered where the pictures couldn’t refresh at quite the right speed to keep up with the active shutter glasses giving a flickering effect no such problems are found with Sharp’s range.

As well as Sony’s Bravia TVs of course Sharp’s 3D TVs have been found to be especially good for 3D gaming with the Playstation. It may well be that the number of 3D games being released will quickly outstrip the number of 3D films being released as it is a simple process to create 3D games from a 3D rendered environment.If the Sharp TV proves a hit with gamers then this could be a massive boost to their sales.