Many reviewers and fans worry that Toshiba may have taken their eye off the ball in terms of developing and releasing Active Shutter TVs in order to focus on their Auto 3D televisions. Auto 3D  wont need glasses but should be viewable from around the room and from a variety of angles.

It may be because Toshiba are planning the prices for their whole range including Auto 3D that glasses reliant 3D TVs are very affordable from Toshiba.The fact that they will be first to market with Auto-3D means that they can afford to cut prices on their active shutter TVs without damaging their brand, plus the technology will have little value soon so there is little point trying to preserve value, they are making 3D TV mainstream therefore. 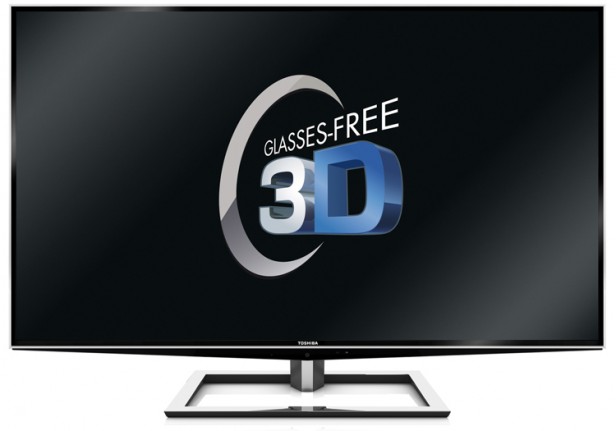 Toshiba offer LCD rather than Plasma 3D TVs but they have been reviewed as some of the best LCD displays rarely suffering from Cross-talk ghosting despite LCDs having a lower frame rate than Plasma meaning that in action scenes in films and in some sport, ghosting occurs where the refresh doesn’t keep up with the shutter speed on the viewer’s glasses.

Toshiba’s first 3D TVs coincided with the first 3D channel to broadcast in the UK, the lack of content previously making 3D TVs a device that would be a hard sell with little to watch. Upscaling 2D content to 3D though adds a lot of extra value and different manufacturers have achieved it to a different extent with some not developing it at all yet. Software must guess how a 2D image should look in 3D and adapt it;it is partly a balancing act between content that looks truly 3 dimensional and content that simply looks distorted. Toshiba have a system that not only upscales 2D content but also they can take 3D broadcast content and upscale it so it is true 3D to the same extent as a Blu-Ray disk. This is because 3D broadcasting currently works on a system where two images are broadcast simultaneously beside each other due to the lack of bandwidth: 3D TVs put these images into a 3D presentation but Toshiba offer the best results with this extra step.

In both the US and in the UK Toshiba’s TVs have been popular for having some of the best internetapplications available on TVs that have built in WI-Fi.Though some applications aren’t directly related to watching TV the BBC iPlayer application and Youtube application add extra value and the TVs are future proof so you can add extra aps and widgets as they become available.

Toshiba’s TVs are also seen as some of the best looking in terms of styling. Toshiba’s 46”WX 800U TV is one of the thinnest available at only 1.2 inches thick making it ideal for wall mounting: unlike some other similar sized 3D TVs where size simply hasn’t been a consideration: where they have been stuffed with chipsets and covered with inputs and outputs, which are organised neatly and accessibly on Toshiba’s TVs.